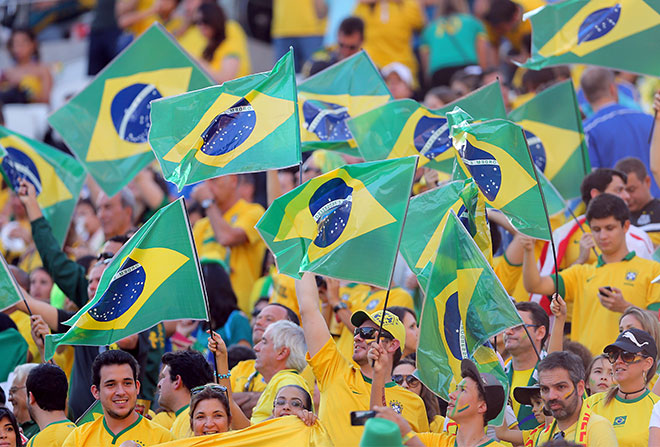 After two rounds of matches that kept millions around the world on the edge of their seats, the final round of group stage matches was also able to deliver in terms of excitement. Only 16 of the original 32 teams would make it out of the group stages, and the desperation of many of the teams to be among this elite group fueled some of the competition’s most memorable and scandalous matches so far.

Coming first out of the four teams in each group holds the incentive of getting to play one of the second-place, and presumably easier, teams in the first knockout round. The home nation Brazil was able to top their group on goal difference after an unsurprising victory over Cameroon. The Netherlands and Chile played to determine the first place finisher, with the Dutch winning out. Sporting soccer uniforms, Costa Rica did its nation proud again by securing a draw with England, which guaranteed them first in their tough group. Other convincing group winners included Colombia, France, and Argentina.

The struggles for second

The scrambles for second place and the right to play on produced some of the most memorable moments of the competition. Mexico’s convincing victory over Croatia sent them through, sparking celebrations in the country. The U.S., meanwhile, had Portugal to thank for progression, as the Americans made it through thanks to a Portuguese win over Ghana. A triumphant Algeria came out on top against Russia to clinch a surprise knockout round place.

Although great soccer is the main attraction, it would not be the World Cup without at least a little scandal in important games. Côte d’Ivoire, for example, will look back on the tournament unhappily as they were eliminated with a controversial last-minute penalty kick against Greece. The scandal of the tournament, however, came in the form of an apparent bite of an Italian opponent’s shoulder by infamous Uruguayan star Luis Suárez. The referee did not see the incident, and Uruguay ended up beating Italy in the must-win match, but Suárez was banned from all soccer matches for four months by FIFA, a move that would surely affect the team when they play the in-form Colombia in the next round.

Only half of the teams that went to Brazil in search of glory are still in the running, with the knockout round, usually the most memorable section of the tournament, ready to begin. Here’s to more great World Cup action in the coming week!