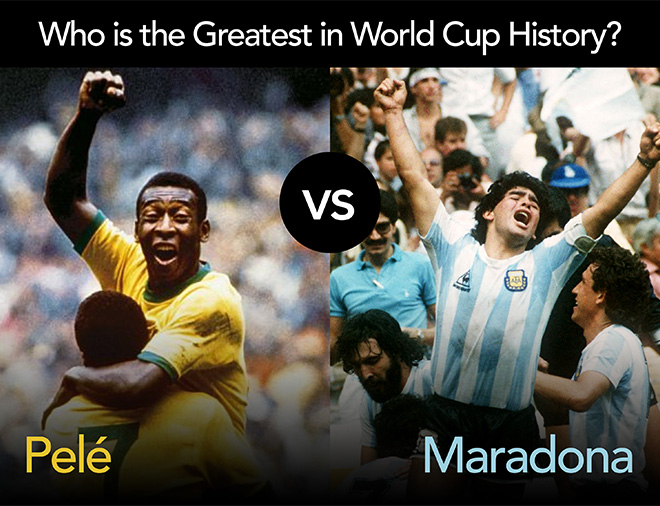 With the World Cup coming up, we would like to look at some of the best players in the tournament’s history. In discussions of the greatest players in World Cup history, there are two names that are always mentioned – the iconic Brazilian forward Pelé and the heroic Argentinean captain Diego Maradona. Let us look at what makes each one a World Cup legend.

Edson Arantes do Nascimento – more commonly known as Pelé – is a hero in his native Brazil and an icon around the world for his play. He is commonly regarded as the best forward ever, and, unlike some other great players in soccer history, he fully showed his skill at World Cups for everyone to see. His first World Cup triumph came in 1958 in Sweden when he was just 17 years old. In a great Brazil team, he was one of the shining stars, scoring twice in the 5 – 2 final win over Sweden. Brazil won the following World Cup in 1962 as well, although Pelé did not play quite as much due to injury. During the 1966 World Cup, Pelé was viciously kicked and fouled so much that he said that tournament would be his last.

Fortunately, Pelé changed his mind. The 1970 World Cup in Mexico saw Brazil become champions again with a team many people think was the best of all time. They played spectacularly, and Pelé, now 29, was the biggest star in the famous yellow and green Brazilian team soccer jerseys. He became the first player to win three World Cups and to this day remains the only player to accomplish this.

Argentinean legend Diego Maradona has been called the biggest personality in soccer history due to his outspoken nature, innumerable controversies, and undeniable brilliance on the field. In his first World Cup in 1982, Maradona was best remembered for a disgraceful foul that earned him a red card in a loss against rivals Brazil – a match that knocked Argentina out of the tournament. Whereas many players might not have been able to recover from this shame, Maradona responded by becoming Argentina captain and producing the best individual performance ever seen at a World Cup in 1986.

The 1986 World Cup in Mexico was remembered above all for Maradona’s play. The captain single-handedly carried an otherwise ordinary team to make them champions, scoring or assisting 10 of Argentina’s 14 goals in the tournament. The 2 – 1 quarter-final win against England was especially memorable, as Maradona showed both his ugly side and his brilliant side. He scored both of Argentina’s goals, the first with his hand in a blatant cheat that he would later call “the Hand of God,” and the second by dribbling from his own half past six England players for what would be called “the Goal of the Century.”

The Pelé versus Maradona debate is one of the biggest in the world of soccer. The two players have become symbols as important to their rivalling countries as the famous soccer uniforms they wore. While Pelé has a record number of World Cup wins on his side, Maradona has the legend of the 1986 World Cup, when he carried an Argentina team to make them champions. We cannot decide between these World Cup heroes. Can you?