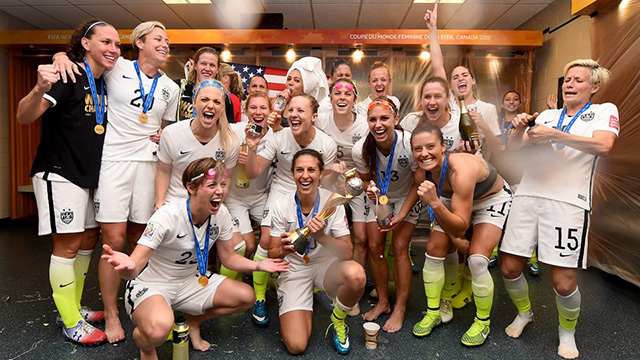 If you were keeping up with the Women’s World Cup, you know that the US Women’s National Team has quite a bit to be proud of! They walked away from the final game against Japan with a 5-2 victory, and even became the first women’s sports team to be honored with a New York City ticker-tape parade.

So how did these talented group make their way to World Cup victory? We’re looking at the stories of the team’s impressive players.

Hope Solo: Like the majority of her teammates, Hope Solo’s talent was clear to see even in high school—but while Solo is now regarded as one of the world’s best goalkeepers, she actually used to play forward! It was her coach at the University of Washington who guided her and helped her make the switch to her current position.

Ashlyn Harris: After proving her chops at Satellite High School in Florida—where she was named National Soccer Coaches Association of America Player of the Year—goalkeeper Ashlyn Harris went on to play for teams in Washington D.C., New York and even Sweden (where she played alongside fellow USWNT players Christen Press, Ali Krieger and Meghan Klingenberg). She made her first USWNT senior appearance on March 11th, 2013.

Alyssa Naeher: Alyssa Naeher rounds out the trio of goalkeepers on the USWNT. She credits her twin sister—a forward—with helping her practice her goalkeeper skills as kids. Although she didn’t get to play in this year’s Cup, Naeher is no stranger to international competition—she helped carry her team to victory in the 2008 U-20 Women’s World Cup in Chile.

Christie Rampone: As the second-most capped female player worldwide, Rampone has no shortage of experience. As a student at New Jersey’s Monmouth University, she excelled in soccer, basketball and lacrosse, but ultimately pursued soccer when she joined the US Women’s National Team in 1997.

Lori Chalupny: Hailing from St. Louis, Missouri, Lori Chalupny was especially grateful to be included in this year’s World Cup. After suffering numerous concussions over the years, she had to go through extensive testing to prove she was able to be part of the team. Now that the Cup is over, she plans on hosting a soccer camp in her home town to help fellow players achieve their own goals for the game.

Becky Sauerbrunn: Another St. Louis native, Becky Sauerbrunn has received multiple honors during her time with Washington Freedom, D.C. United Women and FC Kansas City. This World Cup was Sauerbrunn’s second—in 2011, she helped her team achieve a 3-1 win over France in the semifinal.

Ali Krieger: Born in Virginia, Ali Krieger’s love for soccer was spurred on by her father, who coached her for 12 years. Despite suffering blood clots and tears to both her ACL and MCL, Krieger has recovered multiple times and remains a powerhouse of energy on the field—she played for every minute of the final against Japan!

Whitney Engen: Whitney Engen wanted to be a gymnastic as a child—but learned that her large build would make that hard, if not impossible. The Western New York Flash defender credits switching to soccer (and finding the right team, where she met future USWNT teammate Christen Press) with discovering her passion.

Kelley O’Hara: At a young age, Kelley O’Hara began competing on an international level with the US Youth National Teams and gained new insight into the world around her. She made the switch from forward to outside back to fill the spot of USWNT teammate Ali Krieger, who tore her ACL.

Meghan Klingenberg: Despite having played in every 2015 Cup game and being skilled at all three lines, Meghan Klingenberg wasn’t always the confident soccer star she is now—in fact, she says her game as a kid suffered due to her timidity. Learning taekwondo helped her shake that trait and build important skills.

Julie Johnston: For Julie Johnston, playing soccer as a career was a plan firmly in place since childhood. In 2014, she was selected to join the Chicago Red Stars and started in every game that first season.

Heather O’Reilly: As a kid growing up in East Brunswick, New Jersey, Heather O’Reilly always wanted to make her family proud. After being named to the USWNT while still in high school and competing in multiple Olympic Games and World Cups, it’s safe to say she’s done that and so much more.

Carli Lloyd: Carli Lloyd grew up in New Jersey, where she honed her soccer skills on a neighborhood field. In the 2015 final game, she won the Golden Ball for her performance in the tournament—she also made history by making the first hat trick in the history of Women’s World Cup finals.

Shannon Boxx: Shannon Boxx was raised in California and, like several of her teammates, found her love of soccer while playing at the park. The Chicago Red Stars player is a three-time Olympic Gold medalist, but the recent 2015 win was her first Cup victory—and because she won’t be competing in any more of them, she’s extremely proud of herself and her team for accomplishing the feat this time around.

Lauren Holiday: Growing up watching her brother play soccer, then playing on boys’ teams herself until age 12, laid the way for Lauren Holiday to take on soccer as a career. She graduated high school early to join the U-20 team and has not stopped playing since.

Megan Rapinoe: Megan Rapinoe’s rural California upbringing led her to have fun in the best way she knew how: running around with her sister and, of course, playing soccer. She has since travelled the world playing for different clubs and has found a home with Seattle Reign FC.

Tobin Heath: During her time at UNC, Tobin Heath would play soccer in the halls, parking garages and on the field after hours… whenever she got a chance! She made her debut on the senior national team in 2008, and was the youngest player on the team at just 20 years old.

Morgan Brian: Having grown up on a small Georgia island, Morgan Brian often had to play up in age in order to play at all—her friends and teammates even dubbed her “Plankton.” Today, she’s fittingly the youngest player on the USWNT and plays for Houston Dash as a midfielder.

Abby Wambach: As the youngest of seven children, forward Abby Wambach remembers wanting to pursue soccer so she could one day match up to their accomplishments. In her 14 years leading to her World Cup win with the USWNT, Wambach always promoted closeness among her teammates to allow for bonding on and off the field.

Amy Rodriguez: Amy Rodriguez was picked up by the USWNT while still a high school senior in Beverly Hills, California. She’s been able to grow up with her teammates, growing from a school-aged player to a mom in her ten years with the team.

Alex Morgan: Growing up as the youngest of three sisters, Alex Morgan was fueled by healthy competition in all of her efforts. Apart from her stellar performance at the 2015 Women’s World Cup, Morgan has written a series of books called The Kicks, stories about soccer that she hopes younger readers can relate to.

Sydney Leroux: For forward and British Columbia native Sydney Leroux, soccer offered an outlet that made up for a tough school and social life. Leroux’s strong-footed forward skills and score count earned her a cap in 2011.

Christen Press: Christen Press, a Los Angeles native, always wanted one thing: to be on the USWNT. When she signed with Kopparbergs/Göteborg FC in Sweden, she thought that dream might not come true… but her performance abroad was enough to attract the attention of US clubs and, eventually, the ultimate USWNT.