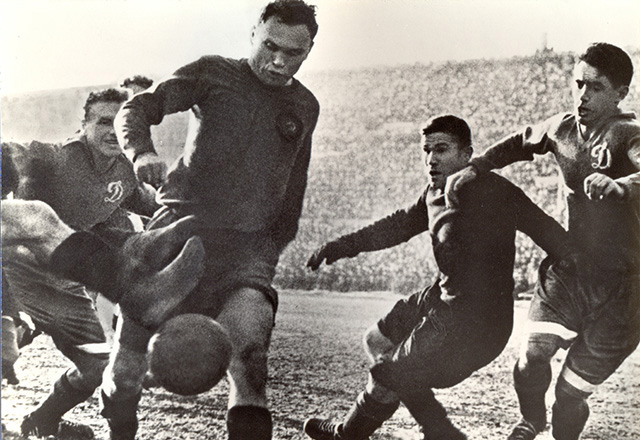 Football, soccer… however you know the game, our favorite pastime has existed for longer than you might think! While the form we’re most familiar with today has its roots in 19th century England, different versions of games that revolve around the kicking of a ball have been around for thousands of years. How much do you know about your favorite game?

In the years leading up to the Football Association’s first meeting (and official recognition of football’s rules and guidelines), the sport in England was gaining popularity; the only problem was that individual groups could each play it a little differently! Although players could follow the Cambridge Rules, a set of rules written up in 1848 at Trinity College of Cambridge, those guidelines were not always universally followed. The following years saw the growing need for standardization and unity among different clubs and regions.

Then, in 1863, a man named Ebenezer Cobb Morley (who would later gain fame as the “Father of Football”) wrote to Bell’s Life newspaper. He proposed setting up rules, guidelines and a governing body for the sport of football. Later that same year, several football clubs sent representatives to Covent Garden, London to take part in The Football Association’s inaugural meeting. Morley drafted the Laws of the Game that we still follow today, and his contributions helped form association football as we know it. (Incidentally, the word “soccer” formed as a shortening of the word “association” in the game’s formal name!)

The English didn’t always love the game; in the early 14th century, King Edward II infamously called for a ban on soccer’s earliest forms as it was noisy and rowdy. Who would’ve known that, centuries later, the sport King Edward II prohibited would be the most popular in Europe and worldwide?

While lovers of the game might have 19th century footballers to thank for the version of soccer we all know and love, the most basic origins of soccer have been around since ancient times. When we look back at China’s Han Dynasty, which lasted from about 206 BC to 220 AD, we find a game called Tsu' Chu, in which players would try to kick and bump a small leather ball into their opponents’ net, which was suspended by bamboo poles. It’s easy to see traces of our modern game in this version!

About 500 to 600 years later, the Japanese game of Kemari first began… and it’s still played today! This game involves the passing-around of a ball in a circle; while there’s no stealing or possession involved, the entire group works together to keep the ball off the ground.

The Romans played an even more exciting early version of what we now know as soccer: Harpastum. This game was played on rectangular fields and had an objective quite similar to today’s version of the game—get the ball over the other team’s boundary line! We can’t quite thank the Romans for bringing soccer to England, however, as this game allowed for passing of all types, including by hand.