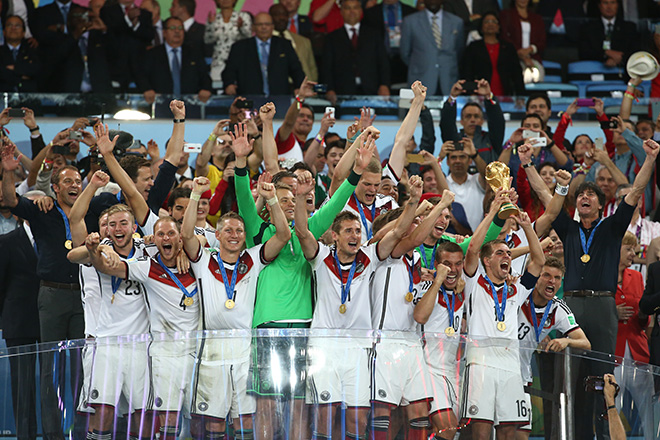 It was a tense, goalless game that had to go into extra time—but in its 113th minute, Germany's Mario Goetze delivered a swift kick that won his country the Cup.

Up until Goetze's pivotal extra-time goal, the match was a demonstration of defense from both teams—much to the dismay of Argentinian forward Lionel Messi, whose dribbling (and one wide post-halftime shot) ultimately fell short.

The world held its breath as the two talents were pitted against each other, while commentators looked forward to a game between the "world's best team and the world's best player." But the former proved superior, when German forward Andre Schuerrle crossed the ball to Goetze; the young midfielder then gained control of the ball with his chest and, in one fluid motion, kicked it to the far post, past goalkeeper Sergio Romero.

Goetze was brought in at the start of extra time as a substitute for Miroslav Klose—a little over 20 minutes later and he was making World Cup history for Germany, who last won the Cup in 1990 as a separated West Germany.

Argentinians crossed their fingers when Messi took his shot at a free kick in the 120th minute; unfortunately, the ball went well over the post.

We think the reaction to Germany's win has been overwhelmingly positive—many acknowledged the team's machine-like structure and perseverance at winning their fourth Cup ever, and first as a united country. Congratulations, Germany!