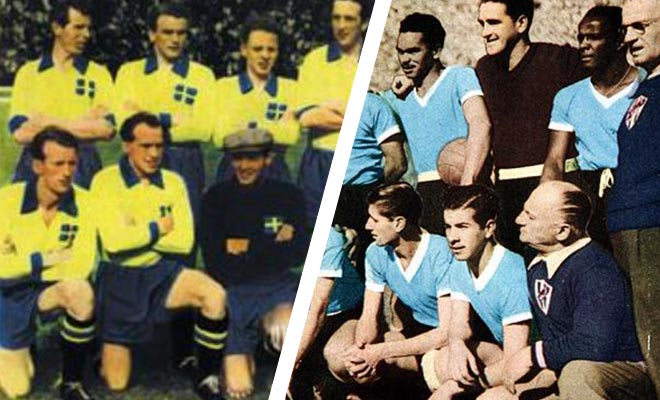 In commemoration of the upcoming FIFA World Cup in Brazil, we would like to commemorate the last World Cup to be held in that country. The 1950 tournament would go on to be one the most memorable ever due to great play and even greater shock upsets.

The United States stun the world

One of the most memorable matches of the tournament took place in Belo Horizante between one of the tournament favorites, England, and the United States. Going into the World Cup, England had recorded spectacular wins over big teams like Italy and Portugal thanks to some of the best players in the world. The United States, on the other hand, had lost their last seven games and had only semi-professional players on their squad, many of them working as dishwashers or mail carriers to support their families.

Against all odds, the U.S. beat the mighty English 1 – 0. Rumor has it that the score was reported by British newspapers as a 10 – 1 win to England because they thought the real score to be a mistake. Known as “The Miracle Match,” the game is one of the biggest upsets in World Cup history.

The 1950 World Cup final saw the struggling Uruguay play the hosts and heavy favorites Brazil. Before the match took place, the Brazilian public was already hailing their dominant team as champions. 210,000 people, a record attendance for any team sport, packed the Maracanã Stadium to watch what should have been a glorious home victory.

In one of the most famous soccer matches ever, Uruguay came from behind to stun Brazil 2 – 1 and completely silence the record-breaking crowd. The result was such a shock that FIFA did not even have a trophy ceremony set up for Uruguay. Some Brazilian players retired out of shame.

As a result of the lost World Cup, the Brazilian national team changed their team soccer jerseys from the “jinxed” white and blue to yellow and green shirts. They have since won five World Cups in these famous soccer uniforms. The yellow and green is today one of the most iconic soccer team uniforms in the world.

Here’s to another memorable Brazilian World Cup this summer!