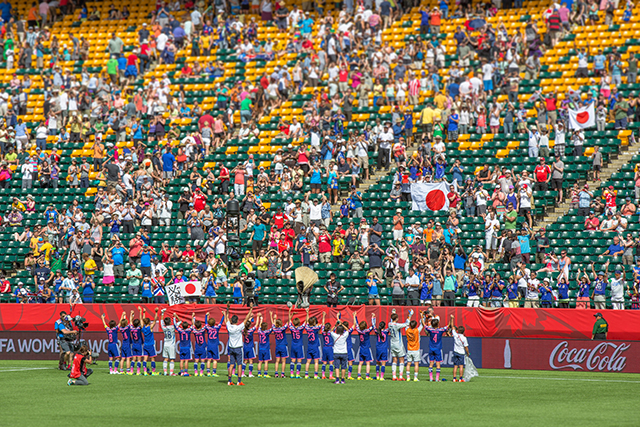 It has been a wild week for soccer fans around the world. If you’ve been keeping up with the FIFA Women’s World Cup in Vancouver, your head has probably been spinning as you kept up with the key players—the US, Germany, Japan and England. We know now that the US and Japan will be going head to head at the World Cup final this Sunday… and how they got to this long-coveted spot is a story worth repeating.

The semifinals kicked off on Tuesday, when the US defeated Germany in a close match. The two formidable teams both had reason to believe they’d be advancing… the US, up to that point, had not let in any goals all Cup long. But Germany had an impressive record as well—in fact, they had either won or tied every game they played.

During Tuesday’s match, the impressive defensive streak by the US team almost came to an end when Germany won a penalty kick at the US goal—lucky for the US ladies, however, Germany’s leading scorer Celia Sasic went too wide. After this close call, it was just a matter of time, a penalty kick and one more goal before the US could claim their victory.

Once the US secured their spot at the final match, it was up to Wednesday’s Japan vs. England match to see who would be joining them on Sunday. This was a close game as well, with both teams boasting one goal by halftime. It was truly a fight to the finish when Japan won their final goal in stoppage time—however, it was not a Japanese player who made this happen. England's Laura Bassett inadvertently made a goal for the opposing team while trying to defend the English side. This mistake led to a win for Japan, and, understandably, heartbreak for the English team and spectators around the world.

So now, we’ll have to wait until Sunday to see who can bring home the Cup. As we mentioned before, each team has its strengths—the US defense has been impeccable by record, and barring a few close calls at goal, they have put up a great fight. Japan has a perfect record of their own, so it will be interesting to see who makes it out on top. We can expect a close game from the teams, who last competed at finals in 2011—Japan won that time, but it was a penalty shoot-out that ultimately decided the match.

All is not lost for the contenders Germany and England, however. On July 4th, these teams will get the chance to compete for the third place spot. We can tell this game will be especially important for English player Laura Bassett. Her accidental own goal was met with sympathy from fellow players and spectators who understand how upsetting it really was—now, she will get a chance to show the world and her fellow players that she’s able to overcome her one mistake shot and come back from it even stronger. We hope that can be of at least some consolation to her and her team!

Who will you be rooting for this Sunday? Get your game face ready and check back with us after the game for highlights and info you might have missed!