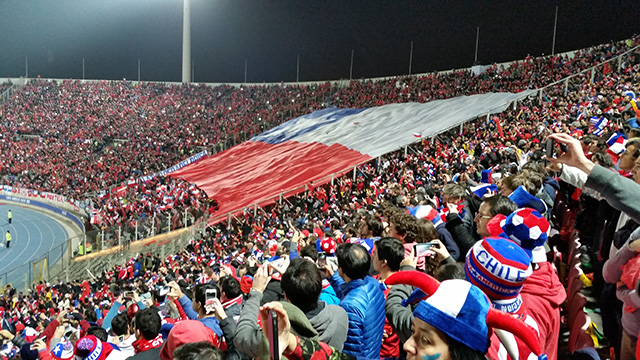 Soccer fans have been spoiled for choice over the last few weeks. As well as the Women’s World Cup, the Copa America, a tournament between the national soccer teams of South America, has thrilled its many spectators. The competition has reached its semi-final stage, and will culminate with the final on July 4th.

Dating back to 1916, the Copa America is the oldest international soccer tournament to span an entire continent, predating the FIFA World Cup by fourteen years. Held every four years in a predetermined South American Country, the reigning champions of Uruguay, Argentina, and Brazil all have had successful tournaments in the past. The two semi-finals in this year’s tournament are between Chile and Peru, who face off tonight, and Argentina and Paraguay, who will play tomorrow, June 30th, for the other spot in the final.

This is a golden generation of soccer players for the host nation of Chile, and with just two victories standing between them and their first ever major trophy, Chilean fans won’t be satisfied with anything less than the title. Their main contender for glory is Argentina, who will hope that their attacking superstars can earn the country its 15th Copa America. Many pundits and fans have been quick to write off Peru’s and Paraguay’s chances of victory, but Peru are sure to be full of confidence after their convincing victory over Venezuela, while Paraguay have already upset Brazil and should not be discounted by any opponents.

While two of the biggest stars in South America, Luis Suarez and Neymar, have missed most of the tournament due to suspension, the continent has plenty of other outstanding players. Fortunately for fans, Argentina’s Lionel Messi, Chile’s Alexis Sanchez, and Peru’s hat-trick hero Paolo Guerrero, as well as many other world-class talents, still have two more matches to play.

While this is an exciting era for many South American teams, this generation of Brazilian teams has been performing at an unusually mediocre level by the country’s high standards. Brazil’s woes from the 2014 World Cup continued when they were eliminated from Copa America after a penalty shoot-out versus Paraguay.

The fate of this tournament will likely come down to the performance of the Argentina’s 4-time World Player of the Year, Lionel Messi. The 28-year-old just finished one of his best seasons at Barcelona, and if he finds his pace at Copa America it is hard to see Argentina losing. In the quarter-final Colombia were ruthlessly aggressive against Messi, fouling him nearly every time he started to look dangerous. This tactic is cynical and hopefully Argentina’s opponents can devise something more sophisticated, like the defending Juventus did in this year’s UEFA Champions League semi-final to stifle Cristiano Ronaldo. Nevertheless, Messi is capable of producing moments of brilliance that fly in the face of any defensive tactics, which should make Argentina’s matches especially enticing.

The home nation Chile must focus on continuing to play as they have done if they want to win the tournament. They have been the tournament’s most impressive team so far, playing with pace and style, like teams of Brazil in the past. Peru and Paraguay will need to be defensively strong and well-organized, which is how underdogs in past tournaments like Greece in Euro 2004 and Costa Rica in the 2014 World Cup have achieved success. It is impossible to say who will win this tournament, but it is certain to have some special moments over the next several days.